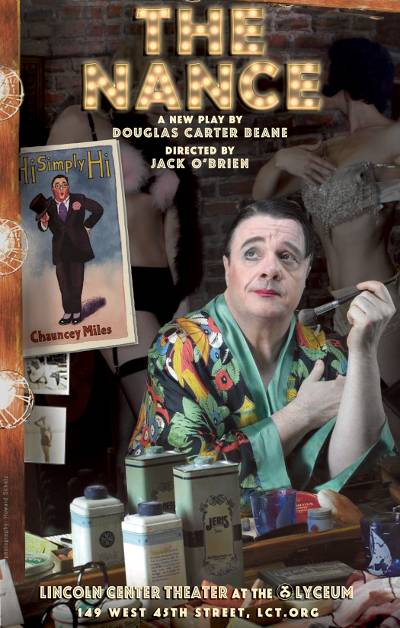 Being taped for PBS's Live From Lincoln Center

3 Amazing performances before the official end of the Broadway Run


"A HEARTFELT NEW PLAY SET IN THE TWILIGHT OF BURLESQUE."
-Brantley, The New York Times"NATHAN LANE IS AS HEARTBREAKING AS HE IS HILARIOUS!"
-Garder, USA Today

In the 1930s, burlesque impresarios welcomed the hilarious comics and musical parodies of vaudeville to their decidedly lowbrow niche. A headliner called "the nance" was a stereotypically camp homosexual and master of comic double entendre - usually played by a straight man.
Douglas Carter Beane's THE NANCE recreates the naughty, raucous world of burlesque's heyday and tells the backstage story of Chauncey Miles and his fellow performers. At a time when it is easy to play gay and dangerous to be gay, Chauncey's uproarious antics on the stage stand out in marked contrast to his offstage life.

* FOR ALL SHOWS YOU MUST ARRIVE AT LEAST 40 MINUTES IN ADVANCE
* YOU MUST BE 18 YEARS OR OLDER TO ATTEND THE SHOWS. YOU MUST LIVE IN THE NEW YORK CITY AREA (NY,NJ,CT) OR BE IN NYC DURING THE FILMING WEEK TO BE ELIGIBLE FOR TICKETS.
* All fields are required.
Please DO NOT submit double requests. If you requested tickets via E-Mail already, do NOT request them again here.
If you experience any problems with the web form, you can try this Alternative Method.