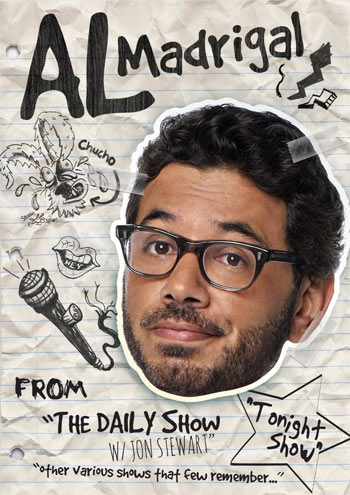 All Tickets are complimentary.
Named Best Stand-Up Comedian by the HBO/U.S. Comedy Arts Festival in Aspen, Al Madrigal's comedy has been called "dynamic" by The New York Times. He is now a seasoned correspondent on "The Daily Show." His unique, spontaneous and fast-paced lyrical storytelling style has made him a regular on television with numerous appearances on Comedy Central including his own half-hour Comedy Central Presents Special and appearances on John Oliver's New York Stand-up Show and Pretend Time with Nick Swardson. Al has also appeared on "The Tonight Show," and "Conan" as well as multiple appearances on "Lopez Tonight," "The Late Late Show with Craig Ferguson" and "Jimmy Kimmel Live." Al also has his share of acting credits. He has appeared on CBS's "Welcome to the Captain" with Jeffrey Tambor and "Gary, Unmarried" with Jay Mohr. Al was on "Free Agents" on NBC with Hank Azaria. Al brings his huge talents to Austin, be lucky enough to see him live.


BE PART OF OUR EXCLUSIVE LIVE AUDIENCE!


Thank you very much for your interest in the show.
- TheBlackList
Audience Department.